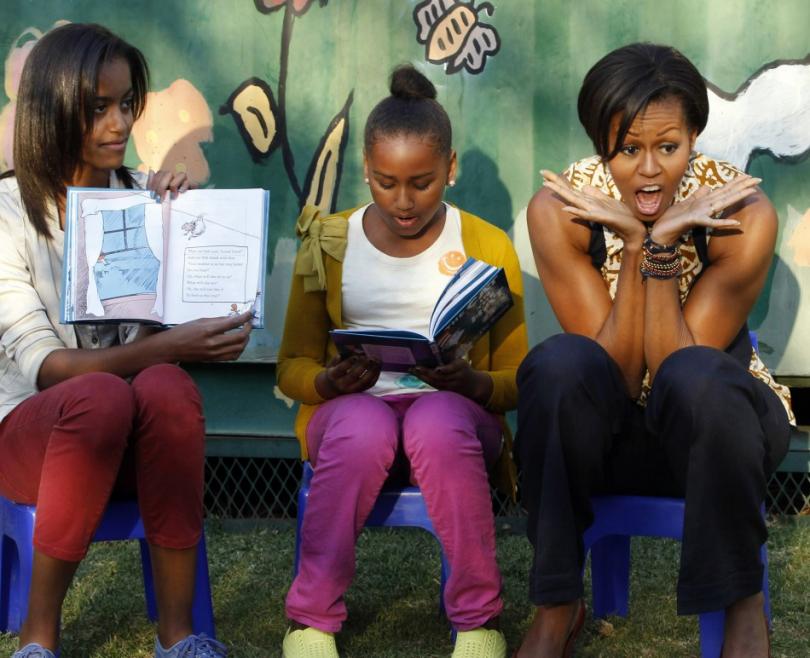 Photo is of Michelle Obama and her daughters in South Africa.

Thank you Michelle Obama for drawing our attention to the historical fact that the White House was built by slaves. This is something I never considered before. It is now an incredible picture that I will  forever hold in my mind.

I cannot even begin to imagine how amazing it must feel, as Michelle said, to wake up in the White House, every day with her daughters.

Smithsonian Magazine states that “ironically, the Statue of Freedom that sits atop the Capitol dome was made with the help of Philip Reid, a man enslaved by sculptor Thomas Crawford, who was commissioned to build the statue.”

That is irony, indeed.

We don’t know a lot about these slaves because they were not considered important. It is tragic to think that all these nameless and faceless people toiled to “make America great,” and no one will ever know their stories. I think about this in relation to women, too. Half the population of the world. Repressed and enslaved down through history. I often wonder what our world would look like if the ideas and innovations of women had been respected and encouraged. As an African American and a woman, with two daughters, Michelle Obama inspires me.

We constantly hear from naysayers that anyone still addressing the significance of slavery in the present day should just “get over it.”

Fact is, the United States was built on not just slavery, but genocide. Having taught creative writing to youth in juvenile hall for years, I venture to say that slavery and genocide are still practiced in the United States. Every American with a desire to be honest has only to look at our prison system and see this to be true.

Germans and Jews talk about Hitler and the genocide. This is healthy. The death camps are open to the public. Monuments have been built so that it will NEVER BE FORGOTEN.

NEVER FORGET. That should be our firm resolve. As a child of ten, I walked through Dachau and will always be grateful to my parents for giving me such a profound experience. That hell is ineradicably fixed in my brain. I will never forget.

Having this history drawn to my attention by Michelle Obama gives me a new and more inspired perspective of an African American family waking up every day in the White House.

It is a story that should not be discussed with controversy. It should be celebrated and never be forgotten.

One Reply to “THANK YOU, MICHELLE OBAMA”