I spent almost the entire month of December in a village called Tissardmine, in the Sahara Desert in Morocco. My mission was to complete the final draft of ‘Book of Angels,’ #2 in the NIGHT ANGELS CHRONICLES, and work on the MY WORLD PROJECT with kids in the village. Both endeavors were a great success. Most importantly, the experience of working with these kids enriched my life in ways that cannot be measured in words on this page. Instead of focusing simply on myself and what I could accomplish through my writing, I was giving children who otherwise had been completely isolated an opportunity to write their words and know that what mattered the most to them–peace and the environment–would be shared across the globe. 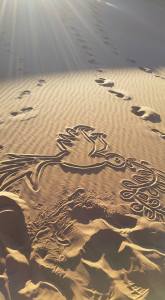 The Sahara is an inspiring place in which to create–for one thing, internet is illusive so you really are completely disconnected and this affords a clear mind and a unique perspective, especially when weeks are spent like this, not simply days.

Kids at the school come from three different villages. They travel up to six miles one way, six days a week, to reach the one-room building that sits on a hill overlooking the village. Lunch is provided by the school, it is the same every day, and everyone enjoys it and no one says, hey, how about something different for once. 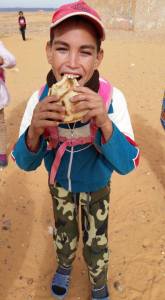 When I explained to the two teachers, Habib and Hafid, what I hoped to do, they were completely onboard and welcomed me warmly. They were two of the most dedicated and caring teachers I have ever met. 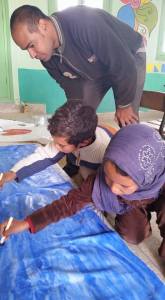 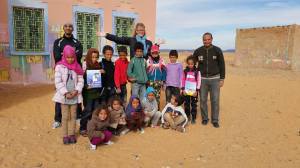 The kids were happy, polite and a joy to be around. With the help of a wonderful young woman artist from Canada named Julie who spoke fluent French (mine was quite rusty), I was able to share the art from the kids we had worked with on the Hoppa Reservation in Northern California and Amazonian Ecuador.

Above Moretecocha kids in Amazonian Ecuador. They most loved nature, but were worried that their world was being destroyed by the oil companies. And below, the art of the Hoopa kids. They, also loved their natural world. But every single child, when asked about challenges, responded with drugs, alcohol and violence.

In contrast, the kids in Tissardmine couldn’t really think of anything negative about their world. They drew positive pictures and shared the words that meant the most to them. Overall, the most popular word was Salam…Peace. 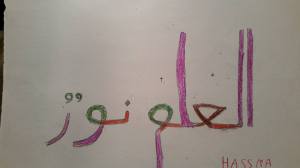 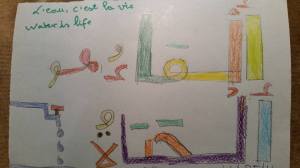 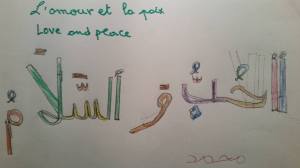 Together, we created a large painting, which I will be sharing with the Hoopa children at the end of March. 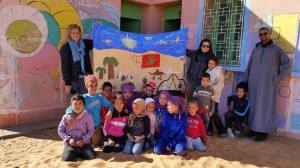 In the late afternoons, I would bring out some drums and the children would run out of their homes to greet me. We would climb to the top of a dune and play the drums and draw until sunset. It is bitterly cold in the desert once the sun goes down and there is no heating and no electricity. The village is quickly quiet. The children told me that they dream of finding meteorites and dinosaur bones. There are many such fossils, but the meteorites are valuable. Every child in every country has a dream. It would be nice if, as they grew older, the dreams stayed pure and sweet and did not become nightmares. 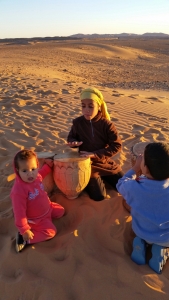 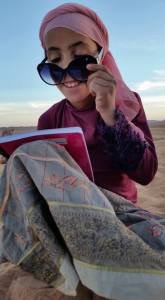 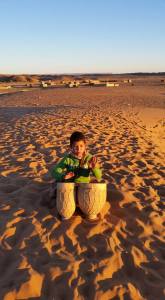 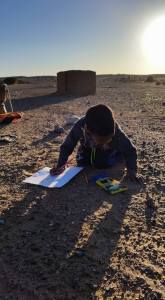 Next stop, after revisiting the Hoopa, will be Syrian refugee children in Slovenia. And children in schools in Los Angeles. What are their dreams? What are their fears? In Tissardmine, and the other Saharan villages, a gunman coming in and shooting up the school is an unknown. Drugs, gangs, these do not exist. That doesn’t mean there aren’t other challenges. But perhaps we can learn from our children across the globe, that, really, we are all the same. We all have dreams that we do not want to turn into nightmares. Special thanks to Leia Marasovich, Jackie Lowe, Christina West and Julie Catherine for their dedication in conducting the MY WOLD PROJECT.

In closing, here is the beautiful letter to the world from Habib and Hafid: 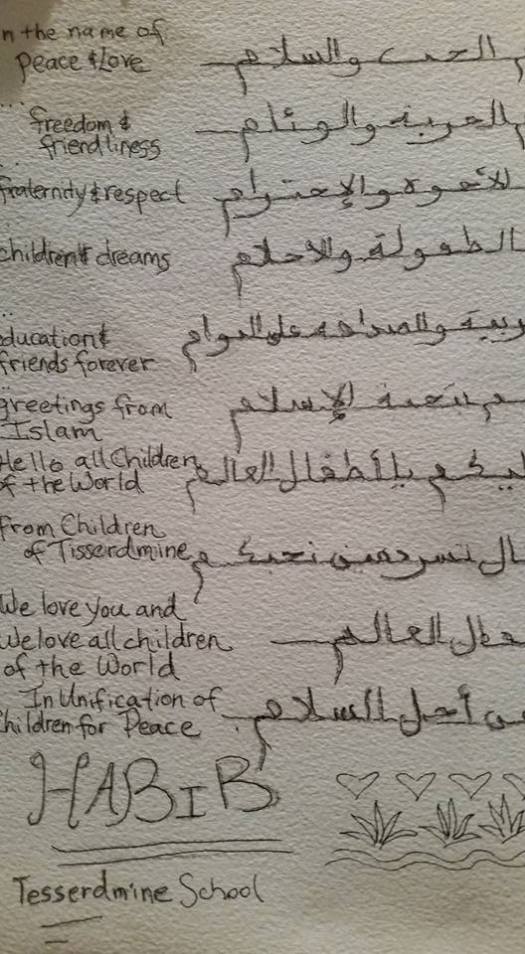 One Reply to “MY WORLD PROJECT IN THE SAHARA”