“Without a vision, the people will perish.” Proverbs 29:18 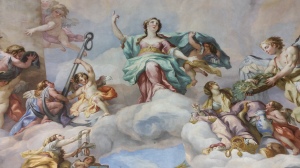 Hello, it’s me, Silvia. I decided to write you this letter to say good-bye. Yes, my time has come. I hardly cry. I haven’t cried for a long time, but today I shed some tears as my friends brought memories of my trial and the last day I got convicted. That was the worst day of my incarceration. I cried like a baby all night long.

I remember my friend Ochoa bringing me a cup of water. I showered right after I came from court and me and Ochoa stood inside the bathroom crying. She was telling me she wanted to do some of my time. Then we had to come out of the bathroom because they had cake and ice cream. It was my 18th birthday but I was too sad to celebrate.

The road is long. It might take me years. I might struggle, fall a couple of times, but I’ll pick myself up. I know I must move on with my life and go to prison. At least then I will know my release date and feel that one day I’ll be home. I’m sad because I’m leaving everybody behind. This has been my home for four years. I grew up here.

Well, Karen, I’m going to let you go for now. Take care and thanks for everything.

Not long after her twentieth birthday, Silvia gave the commencement speech at the Central Juvenile Hall graduation, speaking with eloquence and conviction. When she first entered juvenile hall at sixteen, if anyone would have told her she would do such a thing she would have dismissed them with disdain. Now, I looked at her across the crowd outside the chapel, a tiny twenty year old woman in a cap and gown, talking and smiling with a group of people, and I was so proud and happy for all she had achieved.

I went over and gave her a hug and then she told me the words I had been dreading. “Karen, I’m leaving for prison on Tuesday. I got my clearance, the judge signed my order.”

My first reaction was to say, no, I can fix it, make the judge revoke the order. You haven’t finished your tattoo removal. But I knew that wasn’t what Silvia wanted.

“So I should stop fighting? No more battles?” I said.

She nodded. “I’m ready to go. I mean, it’s not what I want for my life, but I’ve been here long enough.”

Stubbornly, I held on. “But, Silvia, look at your face, your hand. You’ll be in for a long time. I know you’re getting impatient but it’s not going to be better there. And you haven’t finished what you started.”

“Yeah, but they don’t want me here anymore. They want me out. And I’m ready.”

I could see she had closed off the possibility of staying. She wanted to get on with her sentence. She had anticipated it long enough. Sometimes the anticipation of an evil can become worse than the evil itself.

Still, it was maddening. Over a year of treatments and those stubborn tattoos on her face didn’t seem to look much different than they had in the beginning. “It’s because they’re homemade,” the girls had explained to me. “The ink is so concentrated.”

The tattoos on Silvia’s arms had virtually disappeared but the 213 on her fingers was a ghost of its former self, visible still. And then, of course, the sight I could never bear, but that was always there, peeking out from under the orange top, Silvia loves Gerardo, as black as ever, untouched by the laser.

“Won’t it be dangerous to go to prison with that 213 faded so that everyone will know you were trying to get it off?”

So, that morning, under the trees outside the chapel, sipping on bright red fruit punch, Silvia and I said good-bye, with her resigned to her fate and me afraid of letting go. She had been the light in my life, who, without even knowing it, had exposed the dark corners of my heart and made me face the hardest truths about myself.

There were no tears that morning, just a quiet overwhelming sadness. Perhaps, still being young, Silvia thought the story had ended. But that would not be the case. There was never an end. Casey had taught me that.

I wish I could say all those things. But those are chapters yet to be filled. And the odds are against it. Even if Silvia had found her knight and rode off into the sunset, the cold light of day would have followed, just as it had when she sat on the beach, coming down from her high and crying into the rising sun. Pain and pleasure, love and hate, good and bad, we can’t seem to have one without the other. There are always battles to be fought and winning doesn’t necessarily mean killing the enemy.

For now, Silvia languishes in prison. Her appeals have been denied. One day stretches into the next, just as it has done for years already. A life was taken and whether or not justice was served, the fact remains that Silvia did play a small part and so she must pay. Out of this tragedy, Silvia has transformed herself into a person who, if she had remained on the streets, she might never have become. That is the great dichotomy, the twist of fate. Her tattoos were never completely erased. But she tried through the painful process to cleanse her soul. She graduated from high school with top honors and was chosen as valedictorian. Whereas, before she had been silent and submissive, never able to stand up to a man, she now stood before a crowded room, filled with young people who looked up to her, and spoke with courage and conviction.

I pray her words will not be forgotten.

We all hunger for a vision to carry us through, destined as we are to live by faith, not by sight, and to struggle with mysteries beyond our understanding. This means we all share the same, frightening blindness that can cause us to lash out at one another and stumble and fall. Some of us manage to rise above the melee in the most awe-inspiring and courageous ways. Silvia is one such person. Just because she has been locked away and deemed unworthy to live among the rest of us, does not make it right. And just because it is easy to forget her does not mean that we should.

If we do not listen to Silvia and others like her and take their words to heart, then we, as the human race, lose our collective vision.

If only we were willing to admit that we don’t “know” anything, imprisoned as we are within the confines of our own bodies. How much more likely would we then be to show humility and compassion, to reach out and help others when they stumble and fall instead of taking delight in grinding them further into the dirt? How would it be if we opened our minds and learned from unlikely sources; embraced our differences, looked into the eyes and held the hands of those we feared the most?

This “Game of Life,” as the girls in my writing class called it, is not about winning or losing or grasping for a reward in order to prove we are more worthy than someone else. It is about finding our vision and allowing it to lead us forward by faith, from darkness into light, one step at a time.