Please share this eloquent cry for justice! I have written often about my experiences raising teenagers on the mean streets of Los Angeles and my work with incarcerated youth. I have lived abroad and traveled extensively. The United States of America is a police state ruled by fear and greed. 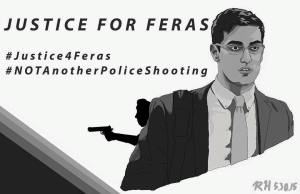 My name is Shawn Haq, I am the Captain of the Speech and Debate team, and I would like to report a murder. The Long Beach Police shot my brother dead in the street at 7:30pm on Wednesday. Feras Morad was a ranking member of ROTC while at ECRCHS. He was a student at Moorpark Community College. He had gotten accepted into UCLA and UC Berkeley, but chose to go to CSU Long Beach to save up money for Law School. He wanted to be a public defender. He wanted to join the military and be a JAG Corps lawyer that prosecuted cases of sexual assault in the Army. He wanted to one day run for political office.
I would like to report a murder. The Long Beach Police shot my coach dead in the street at 7:30pm on Wednesday. Feras Morad had fallen out of a two story window while intoxicated. His friends had called 911 for help. He had a large cut across his shoulder and was bleeding profusely. He was confused, and in desperate need of medical attention. He was unarmed, not a gun or a knife, yet the cop felt it right to take life. That night we lost a brilliant, kind, and gentle soul that was bound for great things, all through an act of senseless violence. He was shot not once, not twice, but 3 times and murdered in the street by Long Beach police. Some of his Debate teammates were present and helplessly watched as his body absorbed the multiple shots from the officer’s gun. The use of handcuffs were never attempted. Feras had no weapon and was not attacking, and yet he was shot 3 times before handcuffs were ever attempted. This is not right. This happens far too often. This cannot continue.
I would like to report a murder. The Long Beach Police shot my best friend dead in the street at 7:30pm on Wednesday. He was brilliant. He was my coach, but he was also my brother. He was my mentor, but also my friend. From competing at Debate tournaments all over California to yelling at each other about Rand Paul, the patriarchy, and tax policy on the streets of Ohio to partying in our hotel in Florida to researching last minute at the Tournament of Champions in Kentucky we’ve traveled the nation and argued and fought and bonded. He stood up for me when no one else did. He was a role model to me in every way from a moral context to an academic context. He was going to do hard thing and achieve great things. He was an inspiration to everyone who had the privilege of having their lives touched by him. He was brilliant. And on the night of Wednesday, May 27th the world was robbed of him.
I would like to report a murder. The Long Beach Police shot my mentor dead in the street at 7:30pm on Wednesday. Since then thousands have come together on various social media sites demanding #Justice4Feras. Feras Morad changed my life and the lives of 100s of other people at El Camino Real, Moorpark, Los Angeles, California, and around the country. He’s watching over us all right now and he’s damn proud of what we are doing. In life, Feras was a champion of social justice. Let’s make sure that stays the same in death. Join the movement. Spread the word. Share the message. Share this story. Let’s get #Justice4Feras trending nationally. Some people live more in 20 years than others do in 80. It’s not the time that matters, it’s the person. The impact Feras made on so many people’s lives is more than most make in a lifetime. In the end we’re all just stories and Feras’ story is damn worth sharing.
The educational community at El Camino Real, in Los Angeles, in California, and across the country is a family. If any community can come together to fight for justice towards innocent and brilliant men, it’s this one.
– Shawn Haqase

Karen Hunt aka KH Mezek is the author and/or illustrator of nineteen children’s books. She is the co-founder of InsideOUT Writers, a creative writing program for incarcerated youth, and the founder of the MY WORLD PROJECT, connecting youth in remote areas through art and writing. She is a 2nd degree black belt in Tang Soo Do, a first degree brown belt in Eskrima, and a boxing and kick-boxing trainer. As a child, her family escaped out of Egypt right before the 6 Day War, lived in a 17th century castle in Switzerland and smuggled Bibles into communist countries, to name a few of her adventures. As an adult, she continued her adventures, living between London and a village in Yugoslavia. She is the author of Key of Mystery and Book of Angels, volumes one and two in the NIGHT ANGELS CHRONICLES, are published with Evernight Teen. View more posts